The Knife of Never Letting Go
by Patrick Ness

Chaos Walking is an American science-fiction action-adventure film directed by Doug Liman from a screenplay by Patrick Ness and Christopher Ford. It is based on the sci-fi trilogy Chaos Walking, adapting its first book, 2008's The Knife of Never Letting Go by Ness, and mainly stars Daisy Ridley and Tom Holland, along with Mads Mikkelsen, Demián Bichir, Cynthia Erivo, Nick Jonas, and David Oyelowo.

Announced in 2011, the film had undergone several rewrites from a first script draft written by Charlie Kaufman, with Jamie Linden, John Lee Hancock, Gary Spinelli, Lindsey Beer, Christopher Ford and Ness revising the screenplay further. Liman was later announced as the director in 2016, with principal photography fully started and finished around 2017. Originally set to release on March 1, 2019, it was removed from schedule to accommodate the films' reshoots in April 2019 following poor test screenings from audiences.

Chaos Walking was released in the United States on March 5, 2021, by Lionsgate.

In the not-too-distant future, Todd Hewitt (Holland) discovers Viola (Ridley), a mysterious girl who crash lands on his planet, where all the women have disappeared and the men are afflicted by "the Noise" – a force that puts all their thoughts on display. In this dangerous landscape, Viola's life is threatened – and as Todd vows to protect her, he will have to discover his own inner power and unlock the planet's dark secrets.

In October 2011, Lionsgate acquired worldwide distribution rights to a film adaptation of Patrick Ness's Chaos Walking trilogy, to be produced by Doug Davison's production company Quadrant Pictures. In 2012, Lionsgate then hired Charlie Kaufman to write the first draft of the screenplay. He then subsequently left after that, confirmed by himself during a Q&A panel at the 2016 Karlovy Vary International Film Festival. That draft would later be revised by Jamie Linden, Lindsey Beer, Gary Spinelli, John Lee Hancock, Christopher Ford and Ness himself. Deadline reported in 2013 that Robert Zemeckis was being considered as the director, but apparently nothing came to fruition. On June 10, 2016, Doug Liman was in talks to direct the film. On August 4, 2016, it was reported that Daisy Ridley joined the cast. She was a fan of the books, and was announced to be playing Viola. On November 28, 2016, Tom Holland joined the cast to play Todd.

In April 2018, it was reported that the film was scheduled to have several weeks of reshoots in late 2018 or early 2019, following poor test screenings. Owing to Ridley's filming commitments to Star Wars: The Rise of Skywalker and Holland's to Spider-Man: Far From Home, the reshoots were not able to begin until April 2019, with Fede Álvarez directing them. These reshoots, which took place in Atlanta and lasted through May, added an additional $15 million to the film's budget. In September 2020, Ness and Ford were given final credit on the screenplay.

Lionsgate has remained silent on the possibility of additional Chaos Walking films and although a film adaptation of The Ask and the Answer should be expected had the first film performed successfully at the box office, the COVID-19 pandemic and it's continuing negative effect on the film industry, makes some possibility for a future trilogy unlikely.

Behind the scenes[edit | edit source] 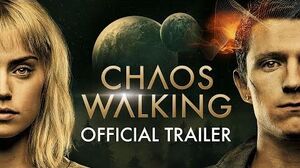 Retrieved from "https://chaoswalking.fandom.com/wiki/Chaos_Walking_(film)?oldid=5259"
Community content is available under CC-BY-SA unless otherwise noted.