Cillian Boyd is one of Todd's father figures. Ben Moore and Cillian were friends of Todd's parents so when they died, they took in Todd. Cillian was convinced by Ben to come to New World and he farms wheat and sheep on their farm with Todd and Ben.

In Chaos Walking, Cillian is portrayed by Kurt Sutter.

Cillian and Todd fight a lot, but according to Ben, this is because he cares about him. It is never established if Ben and Cillian are in a romantic relationship however, it was confirmed that they are actually a couple by Patrick Ness himself. As they are shown from Todd's perspective, light's never shone on this fact as "he wouldn't care".

Cillian's noise is usually a reddish colour, as said by Todd. Cillian wanted to fight against the men of Prentisstown when they were killing the women, but Ben made him stay so they could look after Todd. Cillian dies defending their house to allow time for Todd to escape. 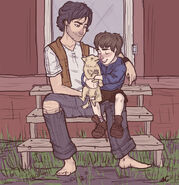 Cillian with Todd and Manchee. (Courtesy of stkidd on DeviantArt)
Add a photo to this gallery
Retrieved from "https://chaoswalking.fandom.com/wiki/Cillian_Boyd?oldid=5250"
Community content is available under CC-BY-SA unless otherwise noted.