The Ask and the Answer

Nick Jonas (Chaos Walking film)
David "Davy" Prentiss, Jr. is the son of Mayor Prentiss. Throughout the series, he is seen to be doing cruel acts (e.g. shooting Viola and branding Spackle) due to a desperation for his father's pride and to be accepted by him. He slowly realizes that what his father is doing is wrong, but is killed by him before he can be fully redeemed.

He is portrayed by Nick Jonas in the film.

Davy is introduced as the Mayor's cold-hearted son, who is 2 years older than Todd Hewitt. In the first book, he plays out as one of the antagonists. When he overhears Todd's Noise in a patch of silence in the swamp, he comes to Ben and Cillian's house to investigate. This leads to an argument where Cillian punches him in the jaw. Davy later appears in the group of men sent after Todd and Viola. He leads the Prentisstown army in attacking Farbranch, along with his father.

Later, Davy catches up to Todd and Viola, laughing in triumph that they were so easy to find. As he threatens to kill them, Viola throws a tracking device onto his chest. The device electrocutes Davy and destroys his rifle. Todd goes to stab and kill him, but Viola says that becoming a killer is what the Prentisstown army wants. Todd instead ties Davy up and leaves him on the road. However, Davy escapes the bindings and goes after the two. He eventually finds Todd, Viola, Ben, and many other New Worlders in Carbonel Downs. Ben stays behind to distract Davy, while giving Todd and Viola a chance to warn Haven of the army. It is presumed Ben dies while trying to stop Davy.

Davy finds Todd and Viola on the road to Haven. He shoots Viola through the stomach with his pistol and rides his horse over to Todd. He says he had orders to bring the two to his father as prisoners. Todd ignores him and blasts Noise at Davy's horse, causing it to rear up. He then punches Davy and the horse, causing Davy to fall off the horse and get dragged away, his foot caught in the stirrup.

The Ask and the Answer[edit | edit source]

Davy's character develops, and he becomes much less of an antagonist. Forced to work with Todd and look after The Burden with him, Davy is initially as rude as ever around Todd, and the two get into a lot of fights. Davy uses Todd's mother's book, which he stole, as a way to pick on Todd. However, as time passes on, he begins to see Todd as his one and only friend and his brother, even returning the book. Davy shows a lot of jealousy towards Todd throughout the book for the praise he receives from Mayor Prentiss. It is shown that Davy has always wanted to please his father, but just doesn't know how.

Throughout the second novel, Todd notices that there is something in Davy's Noise that Davy is keeping from him. When the Mayor is about to shoot Todd and Viola, Davy shows concern for his friend and is on Todd's side. He tries to get them to put down their weapons by encouraging them all to be a peaceful, loving family. Todd sees that Davy has pictures of Todd as his brother, Viola as his sister and the Mayor as his father. He feels hurt and betrayed when Todd points his gun at him. Eventually, the Mayor shoots Davy, which leaves him feeling more hurt and confused than ever before.

In his last few moments, Davy finally reveals to Todd what he has been hiding in his Noise: he discovered Ben racing up the road towards him after Todd and Viola left him, and shot him as a result. However, he also reveals that he regretted what he did, being too scared to go after Ben and too afraid to tell Todd the truth about what happened after he became Davy's only friend. Through his Noise, Davy begs Todd to forgive him "for everything" - Ben, Viola, Prentisstown, letting his father down and more - as if only Todd has the power to do so. However, Davy dies before Todd can say anything, his eyes still pleading for his forgiveness.

Later on, as Todd is about to tie up the Mayor with rope, he takes the time to close Davy's eyes.

Although Davy does not have a physical appearance in the final book of the trilogy, Todd mentions him quite a bit, along with Manchee, with those two characters being the ones he clearly misses the most.

Davy first appears riding into Prentisstown on his horse. He sees Todd Hewitt's Noise and warns him to "watch your Noise". Todd then thinks "SNAKE" and a giant snake from Todd's Noise throws Davy off of his horse. David then appears and evaluates the incident. Later, after Viola is caught, Davy is instructed to watch Viola in his father's house as David tends to Prentisstown. Davy rummages through Viola's sack and inadvertantly blows up David's house with Viola's futuristic lighter. Viola escapes and David yells at his son for letting her escape, lauching the massive manhunt for her. Davy is present when the population of Prentisstown actively track and pursue Todd and Viola throughout New World. 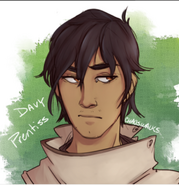 Add a photo to this gallery

Davy and his horse

Davy and the Prentisstown army
Add a photo to this gallery
Retrieved from "https://chaoswalking.fandom.com/wiki/David_Prentiss,_Jr.?oldid=5501"
Community content is available under CC-BY-SA unless otherwise noted.