Chaos Walking Wiki
Register
Don't have an account?
Sign In
Advertisement
in: Characters, The Knife of Never Letting Go, The Ask and the Answer,
and 5 more

Tom Holland (Chaos Walking film)
Todd Hewitt is the main protagonist in the Chaos Walking novels. He is a boy one month shy of turning thirteen when the trilogy begins,[1] brought up by his guardians Ben Moore and Cillian Boyd.

Todd was kept unaware of Prentisstown's history until late in the first book. Todd is illiterate at the start of the series, which gives the unique writing due to the first person perspective of the book. He is the sole narrator in the first book, and remains the lead through the second and third. Interestingly, in the three short stories he is only ever mentioned.

Little is known about his parents, who both died when he was an infant; Todd only knows about his mother through Ben and Cillian and her diary, and his father is rarely even mentioned.

He is currently in a relationship with Viola Eade.

Todd Hewitt is portrayed by Tom Holland in Chaos Walking.

Todd has brown hair and green eyes. Since it is unknown what skin color he has, most people assume that he is light-skinned. In her journal, Mrs. Hewitt mentions that Todd is the almost spitting image of his father, Mr. Hewitt. Todd has a crooked smile, as mentioned by Viola. In The Ask and the Answer, Todd is shown to be physically maturing from a boy to a man, as noted by Viola. Todd's voice has changed from youngish to deep and full.

Todd is shown wearing a type of uniform unique to Prentisstown in The Knife of Never Letting Go. When he sees his reflection in water later in book one while searching for Viola, Todd was wearing a brown shirt.

Up until the finale of The Knife of Never Letting Go, Todd had Ben's hunting knife with him as his main weapon of choice. The knife is currently in the back of Aaron's corpse, as it was used by Viola to kill him.

In The Ask and the Answer, Todd is shown wearing different clothing as a solider of New Prentisstown. After the Ask is formed, he is shown wearing a Lieutenant's uniform of the Ask, which he wears for the rest of book 2.

In Monsters of Men, Todd was seen wearing David Prentiss' uniform alongside David - navy blue with gold stripes - during the revamped Spackle War. However, this uniform caused Todd to be shot by 1017. It is plausible that Todd will have a scar on his body from where 1017 shot him with the acid rifle.

Todd is shown to be naive at the begining of the series, although later becomes more knowledgeable. He has also been showing swearing throughout the series, but they have been censored due to the book's target audience. As Todd is from Prentisstown, most people have tried to kill him and Todd has tried to prove himself as the sole outlier of Prentisstown.

Todd is mentioned to be the only person from Prentisstown who cannot kill another human willingly. However, he nearly becomes a stone-cold killer in book 2 as a result of being gaslit by David Prentiss, Sr. and without having the prescence of Viola nearby.

Considering his close relations with others, Todd is protective of those he loves and would do anything for them.

Todd Hewitt was born to two unknown humans on New World. When he was little, his parents gave him to Ben and Cillian to raise him in their absence before being slaughtered by David Prentiss.

The Knife of Never Letting Go[]

David Prentiss has prevented Todd from gaining an education, meaning that he cannot read or write. This has created a problem that has prevented him from reading his mother's diary and communicating with Viola from the scout ship in Monsters of Men.

Todd and his dog Manchee are first shown in the Prentisstown swamp, looking for fruit to bring to Ben when he discovers silence: an oddity in the Noise. As he keeps walking in the swamp, he encounters Aaron, who slaps him for revealing the true nature of his Noise. Todd tries to find the origin of silence of New World in an abandoned Spackle village, but he cannot locate the source.

Todd walks into Prentisstown from the swamp to Ben and Cillian's house, where it is almost time for lamb harvesting. Todd finds Ben on his way to the sheep farm when Cillian begins called Ben and Todd to the house. With no time to lose, Ben and Cillian pack Todd for survival away from Prentisstown as Davy appears at the house wanting to talk to Todd.

As he escapes Prentisstown, Todd is attacked by a rabid crocodile in the main river.

After Manchee's death, Todd starts to realize how much Manchee meant to him and appreciates the dog's help to him more.

The Ask and the Answer[]

Todd commits horrible acts of cruelty against Spackle, women, and becomes colder without Viola to help. He is at first forced to do so because Viola is under the Mayor's control, but as the novel progresses, Todd starts to lose who he really is. It is only until Mayor Prentiss reveals his plans that Todd sees he must fight him to save Viola, and New Prentisstown.

Throughout the novels, Todd is repeatedly pressured to murder another human being in order to fulfil Mayor Prentiss' plans. However, his character is labelled unable to kill, until the end of book 2, where his Noise reveals that he would kill for Viola. This then leads him to participate in war, and he has since killed many Spackle in self defence, though has not killed any men.

Todd's character is further challenged. When spending time with the Mayor, the two develop a link (denoted by a small humming in their Noise), and begins to both influence and be influenced by him. Todd also learns to refine his ability to control his Noise, thus allowing him to silence it, use it as a weapon, learn with it, and use it to control other people, despite not wanting to. However, in the end, it is revealed that by silencing one's Noise, the attack power of the Noise is decreased. Todd does, however, inevitably end up trusting the Mayor again, and saves him unconsciously from death several times. However, when Ben shows up, this filial bond breaks. The skills taught to him ultimately help Todd defeat the Mayor in a battle using only his Noise.

The Return, 1017, mortally wounds Todd near the end of book 3, mistaking Todd for the Mayor, though he admits that he wasn't sure and didn't care when he fired his weapon. Todd's Noise leaves, returning in small bursts, and he remains in a coma-like state of death at the end of the book. However, the epilogue hints that he will wake so long as Viola keeps "calling" him.

At the end of the short-story, it is revealed by Viola that Todd has awoken from his coma.

Todd Hewitt is first seen thinking to himself with his Noise while walking with Manchee in the forest.

Todd and Viola first properly meet when Todd has been forced out of his home by the men of Prentisstown. At first, they are wary of each other and Todd hates her silence, as Viola and the rest of the women don't have Noise. Viola does not talk for much of the start of the first book, and this also unnerves Todd. However, it is shown that he deeply cares for her and realises his harshness towards her after they blow up the bridge. Todd punches himself in the face to vent his frustration, rather than unduly on her. After this, Viola begins speaking.

From then, Viola and Todd have an intense relationship. Todd drives himself to near insanity rescuing her from Aaron in the first book, and both are obsessed with seeing the other in The Ask and the Answer. Viola and Todd prove that they will do anything for each other, which leads Viola to worry that they've become too dependent on each other to the extent that they would let everyone in the world die if it meant saving each other.

Though the relationship remains generally platonic in the first and second books, in Monsters of Men they kiss and begin a romantic relationship, which seemed to have a promising future for both of them. Todd and Viola, in the limited time they had as an established couple, discussed moving away together. However, the plans were put on hold when it seemed that Todd had been killed by 1017. Viola had been heartbroken, and she and Ben tended over Todd while he recovered. Viola stayed by his side for the months that he was comatose and read from his mother's diary every day. During his time recovering, Todd recalled many fond memories between him and Viola, which made her slightly embarrassed but also deepened their caring towards each other. In his dream state, Todd begs Viola to keep reading, using her voice as an anchor to come back to reality.

Ben and Cillian adopted Todd when he was very young after Todd's mother was killed by Mayor Prentiss and his father months before he was born. Todd loves them both, but is closest with Ben, who he calls his 'Pa', and with whom he has a very deep, nurturing relationship with. Todd grumbles about being told to do chores by his fathers, but he forgives them, and more specifically Ben, readily. It is revealed that Ben cared for Todd while he had been very sick when he was younger and hallucinating.

Todd is devastated when he believes that Ben is dead, but is angry at him as well for sending him off from his home. When he later sees Ben, he is ecstatic, and incredibly disappointed when Ben reveals that he can't go on with them to Haven. From there we later learn that Ben was shot and left to die by Davy Prentiss Jr.. Proof of Todd's love for Ben is in how deeply Todd despises Davy after learning the news, and how angry he is over his father figure's death.

In Monsters of Men, when Ben is revealed to be alive and well, Todd is the happiest that we'd seen him all book. From Todd's point of view, Ben coming back is the greatest thing that could have happened. The two share time together catching up and reconnecting.

Todd feels that Davy is killer at the beginning of the series. However, in book 2, Todd begins to tolerate Davy after both teens are assigned to work with each other.

Todd abuses 1017 while the Spackle is in custody of the humans. He is irriated by his prescence throughout the novel. After The Burden are killed, Todd urges 1017 to flee Haven and the Spackle does. During the revamped Spackle War, the Return always thought of killing "The Knife" (Todd). After Todd is shot by the Sky's acid rifle, the Sky realizes that killing Todd means nothing to him. 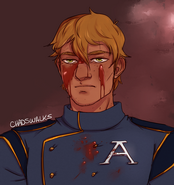 Todd (The Ask) by chaoswalks on Tumblr 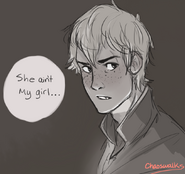 Todd Hewitt by chaoswalks on DeviantArt

Viola, Todd, and Manchee on raft

Todd realizes that Ben is dying

Todd and Ben reunite in Farbranch

Viola and Todd on a monorail tower

Community content is available under CC-BY-SA unless otherwise noted.
Advertisement