Chaos Walking Wiki
Register
Don't have an account?
Sign In
Advertisement
in: Characters, The Knife of Never Letting Go, The Ask and the Answer,
and 7 more

Daisy Ridley (Chaos Walking film)
Viola Eade is a settler on New World and one of the main protagonists of the Chaos Walking novels alongside Todd Hewitt. Since she is female, she has no Noise. After meeting Todd in the first book, she falls in love with him throughout the trilogy and is currently in a relationship with him.

Viola is portrayed by Daisy Ridley in Chaos Walking.

Viola has blonde hair. At the beginning of the trilogy, it is short. In The Ask of the Answer, when Todd witnesses Viola being tortured, her hair is long.

When she first appeared in The Knife of Never Letting Go, Viola is shown wearing clothing similar to Todd's.

When she awakes in a House of Healing in The Ask and the Answer, Viola was seen wearing a white hospital gown. Later, in the same novel, she becomes a Healer apprentice; she wears the uniform of Healers: white coat and hat, with a blue hand sewn into the hand.

When Viola escapes the Houses of Healing to bring medicine to the Answer, she is shown wearing some of her old clothing and a blue headscarf.

At the beginning of the series, she is shown by reserved.

Throughout the series, she is always shown willing to fight for survival.

Viola Eade was born on an Expansion Class Seven ship to two unknown humans. Prior to the series she is sent out on a scout ship with her family. As they were landing, the safety rig failed, killing Mr. and Mrs. Eade in the process.

Viola is the main protagonist of The New World.

The Knife of Never Letting Go[]

Viola (unnamed) is hinted at when Todd senses a disturbance, or area of silence, in the Noise around the old Spackle swamp village. Later, she is found terrified of Todd and Manchee when they find her, since Todd is holding Ben's hunting knife at her and Manchee is sniffing her. Since she is terrified, it takes Viola several chapters to speak to Todd. Viola attacks Todd as he tries to read Ben's map in Mrs. Hewitt's diary. Todd attempts to mend Viola's bloodied arm, but is found by the preacher of Prentisstown, Aaron. We later learn that this was not her first encounter with Aaron, and it was his craziness that caused Viola to be terrified of Todd. Viola is the first female Todd has seen, since he has told that all the women on New World died from the Noise virus. This leads to the two being forced to run away from Prentisstown. Viola refuses to talk to Todd out of fear until she uses her fire box (a gift from Bradley Trench) to blow up a bridge in hopes to stop the mayor from catching them. After this she realizes she can trust Todd and they start to become closer. At the end of this book, they see each other as family, both repeatedly mentioning how much they need each other.

After that, they find Hildy and Tam, who let them stay the night and bring them to Farbranch, a different settlement, where they learn that men from Prentisstown are not easily accepted, that the Noise germ is not what killed the women of Prentisstown, and that the settlement called Haven, might have a way for Viola to contact her settler ship. However, they leave Farbranch when the settlement is attacked by an army of Prentisstown men and they need to run.

On the way to Haven, Viola is captured by Aaron. She is later rescued by Todd, but in the process, Aaron kills Manchee. When they are close to Haven, they have a final battle with Aaron, and Viola stabs him. On the final walk to Haven, she is shot by Davy Prentiss Jr.. As Todd and Viola now see each other as family, Todd wills her to stay alive, and carrying her, gets them both to Haven. When they arrive, Todd finds the settlement deserted with a dying Viola in his arms. While screaming for help, David Prentiss Sr, arrives announcing himself as president of New World.

The Ask and the Answer[]

Viola has been separated from Todd and placed in a House of Healing where Mistress Coyle has mended her bullet wound. She discovers that Mayor Prentiss is now in power, Haven is now "New Prentisstown", and that the women have been forced to stay inside for the time being. She also meets two apprentices, Maddy, a sweet good-natured girl, and Corinne, a short-tempered, yet terrific healer.

Once she heals, Mistress Coyle trains her as an apprentice and employs her, but Viola still wants to escape, contact her ship, and reunite with Todd. She convinces Maddy to help her sneak out and go to the communications tower, but they're caught and Maddy is shot and killed by Mr. Hammar. The mayor promises her she can see Todd the day after the funeral. During the wake, Mistress Coyle tells Viola how much she misses the ocean.

The next day, Mistress Coyle and the rest of the mistresses are inexplicably missing, have been bombing empty buildings and calling themselves the Answer, and the mayor says he will no longer let Viola see Todd. However, that night, Todd sneaks out to see her, and she tells him about the ocean. He convinces her to sneak away with him to find the Answer, but Todd is caught and taken back with the mayor. The next morning, Corinne helps Viola escape on her own to join the Answer before the mayor takes her. She tries to go to the communications tower on the way, but as she approaches, she is stopped by Mistress Coyle, and the tower is blown up. She takes Viola to the base of the Answer, which is actually far away from the ocean. There she meets Lee, who becomes a good friend, and later expresses his feelings for her through his Noise, silent at the moment due to Haven's cure.

Mistress Lawson tricks her while the others go to New Prentisstown. Once they return, she helps heal the wounded. Viola learned that all the women were banded to keep track of them, and willingly brands herself with the metal band to sneak into the city and save Todd. They are close to escaping when Haven's former mayor betrays Todd and catches them sneaking away. He starts looking through Viola's bag, and finds to everyone's shock and horror, including Viola's, that Mistress Coyle had planted a bomb inside her bag. It detonates, and Todd, Viola, and Lee, who came along, survive but are caught by the mayor and his men. Viola is Asked, a form of torture to get information about the Answer. Todd is forced to watch, and while Viola refuses to give any information, Todd cannot take it and yells out where the Answer is planning to attack. Afterward, they escape together and fight the mayor. They prevail, but only after the mayor shoots Davy Prentiss Jr. They tie the mayor to a tree, and they notice a scout ship landing close to the city. An injured Viola rides away on Todd's horse to meet her comrades from the scout ship. While riding she hears a deafening blow of a horn, which is later learnt to be the Spackle joining the war. This causes Todd to untie the mayor so he can help lead the army.

Viola comes close to death, infected by the virus Mayor Prentiss placed in all the metal bands. She starts the Spackle War for Todd by launching a missile from the scout ship and realizes that she will kill for Todd, noting that it is a dangerous thing. She and Todd finally kiss towards the end of the novel, but she is left devastated when Todd is shot by 1017 with an acid rifle, after beating the mayor in a Noise battle, and "dies". Ben hears Todd's Noise, revealing that he is not dead. In the end, she reads Todd’s mother’s journal to him, giving Todd motivation to wake up.

Following the third novel, Viola reveals to Lee and Bradley that Todd has awoken.

Viola is first seen when her scout ship lands on New World. Upon entering the atmosphere, all the men have been infected with the Noise and the ship begins to crash. As the ship begins burning up, Viola saves herself. On New World, Viola begins stealing resources from the people of Prentisstown to survive. She and Todd informally meet when Todd chases her after he finds her stealing from his, Cillian, and Ben's barn. Todd chases her to her scout ship and is nowhere to be found.

Viola firsts meets Todd after crash-landing on New World. She befriends him over the course of book one; she is seemingly infatuated with or fallen in love with Todd by book 2. In book 3, both Viola and Todd start a romantic relationship.

Viola meets Lee in the Answer and they become close friends. When they first meet, Lee had access to the cure and had no Noise, but later on regains it and Viola learns that Lee has feelings for her.

Manchee was the only dog Viola knew on New World.

Since there are no detailed descriptions of Viola in the books, many fans have come up with fan art of what she might look like, such as the following. 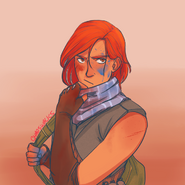 Viola Eade (ready for battle) by chaoswalks on DeviantArt 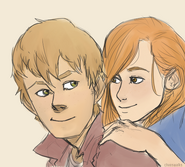 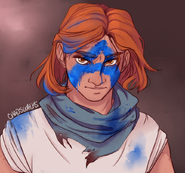 Viola by chaoswalks on DeviantArt

Viola, Todd, and Manchee on raft

Todd and Viola sitting on a monorail support

Viola on the shore of a river

Viola in a shapeship hospital 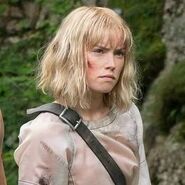 Viola in the scout ship (aka Viola's first appearance)

Viola with a shotgun
Community content is available under CC-BY-SA unless otherwise noted.
Advertisement